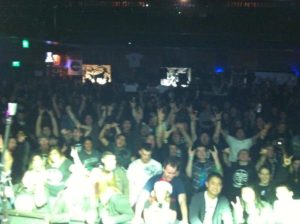 Cerebellion played to a packed Anaheim House of Blues on Tuesday, December 6th for the annual Detour Live Toy Drive with their good friends Sorizon, Crossed Keys, Hestyn, Evisc, and Good Guys in Black also appeared and tore up their respective sets. It was an amazing night of charity and music. Many gifts were brought for the kiddos in need in the spirit of the holidays and the music was just off the hook all night.

Cerebellion played third at 9:15 to a severely packed house and blew through a 30-minute set that left the audience needing more. The night could not have been more epic! Thank you to everyone who came out, yelled their ass off, and donated toys and canned goods. The show was amazing because of you! Here’s a great review of Cerebellion’s set equipped with 3 videos. Thanks to Buzz Radio for the post: http://www.buzz-radio.net/cerebellion-plays-hob-anaheim